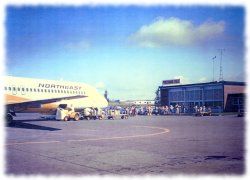 With war clouds looming over Europe, and because of Northern Maine being the closest United States land area to Europe, the Presque Isle airfield was acquired by the US Defense Department in 1940 for the future defense of the country.

The Presque Isle Airport continued to operate commercial air service with Boston & Maine Airways until the company changed their name to "Northeast Airlines" in 1940. Northeast Airlines continued to provide commercial travel to and from Presque Isle during the 1940's and was contracted to run regular air service to a number of destinations in Canada.

In 1941, the "Presque Isle Army Air Field" was established as the departure point for planes and equipment going overseas. As if overnight, the base became a very important part of the nation's defense. More combat planes left from the Presque Isle Army Air Field for Europe than any other base in the United States. The mission of the base remained unchanged until the end of WWII in 1945 when the base was deactivated. 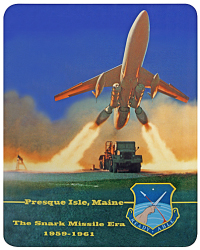 The peace which followed World War II was disrupted by the threat of Communism which was brewing in Korea. On January 12, 1948, the base was reactivated by the United States Air Force and redesignated as the "Presque Isle Air Force Base" and assigned to the Air Defense Command with the mission of being to defend the airways of the Northeastern United States. The base was also used to conduct basic training exercises for Air Force recruits.

On January 1, 1959, the role of the Presque Isle Air Force Base in the nation's defense plan changed again. The "702nd Strategic Missile Wing" was activated and the base became the nation's first "Intercontinental Missile Base" which was equipped with the "SM-62 Snark" cruise missile. The Snark missile was a high altitude (50,000 ft) swept wing missile with a self-contained non-jammable star-tracking guidance system capable of delivering a nuclear bomb 5,000 miles away at speeds of Mach 0.9. Following the construction of specialized buildings to house the large missiles and equipment, the Snark officially went on alert on March 18, 1960. The 702nd was not declared fully operational until February 1961, however in March 1961 President John F. Kennedy declared the Snark "obsolete and of marginal military value". On June 25, 1961, the 702nd was deactivated and all military activity ceased at the Presque Isle Air Force Base.

On July 5, 1961 the City of Presque Isle created a new corporation named the "Presque Isle Industrial Council". The primary purpose of the corporation was to formulate and implement an industrial development program for the City. Its initial task was to meet with Local, State, and Federal agencies in an attempt to acquire the military base and develop it into an industrial park. The government deeded land areas and buildings to the "City of Presque Isle", "State of Maine" and "Maine School Administrative District #1 (MSAD#1)". The City acquired a total of 1890 acres which included the airport and 440 acres for industrial purposes.

In late 1961, the Presque Isle Industrial Council began to promote and develop the 440 acres of land and former military buildings into what is known today as "Skyway Industrial Park".